Stefan Prigmore - Everything is at least both   (Waardering Muziekwereld) 8½ 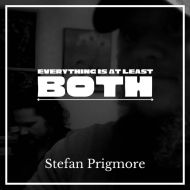 Today, my husband Stefan Prigmore released a new album called Everything Is at Least Both. I'm excited for everyone to hear it, but at home, we've been living with and loving and nurturing this album for the past year. I know it like my own hands. I know everything about it, even the stuff I don't understand about the technical side of things. Let's get into it...an album review by his wife, biggest fan, best friend, dog mom, and shoulder to lean on.

The cover is dark, and looks almost black, with striking white lettering. When we look closely, we can make out two faint figures. One of them is gone from us now. A few years ago, these two made a gorgeous album together in our home. They were connected by much more than friendship, and their philosophy on life gave this album its name. Everything is always at least both, and more...

The first track is a spoken word poem written by Stefan during his hitchhiking days. He wanted to use it somehow, and he took it to Clay. Stefan was so excited when he called to tell me about all the spooky, dark, ethereal stuff Clay had come up with for instrumentation. It really became something entirely new and unique within Stefan's catalog.

The second track, Gunpowder and Pine, was also a collaboration with Clay Parker, the producer engineer for the album. Stefan had a pre-recording session with Clay in south Louisiana, at which I know for certain there was plenty of whiskey, pie, and biscuits. Stefan started the song after we moved to East Texas, and Clay helped finish writing it. Stefan was so happy about the way Clay's lyrics finished the verses, and it came together in a very warm and comfortable way. It has been such a joy to watch their friendship and creative partnership evolve and strengthen. This track also welcomes Pete Damore and James McCann to the album. Pete (Ordinary Elephant) on mandolin and octave mandolin adds depth and folk roots and general awesomeness. James on dobro and steel guitar kicks everything up several notches. I remember getting a video of their weekend recording session, and they were all standing around grinning hugely at each other and clearly enjoying themselves very much. I think of that when I hear these songs.

The third track is a song called I Play C, written by prolific Fort Worth songwriter James Michael Taylor. It's a heartbreaking and hopeful tune of dust, death, despair, family, and unconditional love. Stefan has played a cover version of it in honor of James for many years. When I met James, he had just played this song at Rodney Moore's Picking Round the Campfire at Last Call bar. Stefan wasn't there yet, and James charmingly introduced himself to me and told me the name of the song. Rodney helpfully jumped in, "She knows the song, she's dating Stefan!"

The fourth track is called Tracy. When I first started dating Stefan, I knew this song was about an ex girlfriend. It was also everyone else's favorite song of his. I had a brief flare of envy, and then I listened to the words. This is the best breakup song ever, and I'm so grateful.

The fifth track is Devil Dogs and the Rattlesnake. These south La boys really dig into the swamp on this one, as Stefan spins a fabled yarn of acceptance, redemption, lessons learned, and the power of nature.

When Stefan decided to start playing a cover of Heather Little's song Razor Wire, it was during pandemic quarantine. He had always been moved by the song, but he burrowed further into it and obsessed for hours on the perfect guitar parts to make it his own. It's track six on the new album with some beautiful instrumentation and arrangements by Clay, James, and Pete. Friends of both Stefan and Heather sometimes enjoy requesting that each of them play their own versions of this wonderful song.

Next up is the rollicking, rocking romp called Lacretia. Stefan told more about the background of this song on a recent Funkytown podcast. Suffice to say, yes it's about that one bait shop on Jacksboro Highway. Yes, this lady was a real rough cob. And no, we don't know for sure whether she was actually murdered. But she didn't act like someone who cared about escaping death threats, so no one knows for sure.

Track eight is CV 19. This song was cowritten with Jaimee Harris while the world was shut down. We had watched in shock as our dear friend's death was made into a political issue, and that was never okay. These events in March 2020 shaped everything we felt and experienced during the pandemic. Our friend was dynamic, joyful, and a true voice of God on Earth.

Track nine is the rousing favorite, Door Girl. This version is slower than we've been accustomed to, and I asked Stefan about it. He said, "James really takes this thing into outer space." It turns out, this is absolutely true. The tones on steel guitar are out of this world. This hilarious song is always a crowd pleaser, with its witty phrases and quintessential introduction, "And then she moved to Houston with my brother." Thanks for giving me the chance, LF!

Track ten is Kramer's Song. Out at the junction of Stephens and Throckmorton counties, there's a magical wooden shack where you can belly up to the bar, watch the game, get the gossip, hear the music, and get a six pack to go. We met Keaton there - a friendly, open guy with a great smile and a love for music. I chatted with him about his job in the oil fields, and he bought one of everything from Stefan's merch box. He helped me balance on a chair and attach my signed dollar to the wall of the beer joint as is their custom. When we heard his bright light was gone, we were devastated and our hearts went out to the family and friends in that little area.

The final track eleven is an unbelievable version of longtime favorite Real Man. Everyone on this track is giving it everything they've got. Soaring vocals, intricate rhythms, hints of blues and zydeco and Motown, and gut wrenching lyrics. Stefan plays drums on this track, which is common for him, but not everyone knows it was his first instrument. He plays for the love of his dad Chuck, a fantastic drummer and our favorite veteran, whom we miss everyday. He's pictured here at his last dove hunt.

Direct link: Music that needs attention: Stefan Prigmore : Everything Is at Least Both